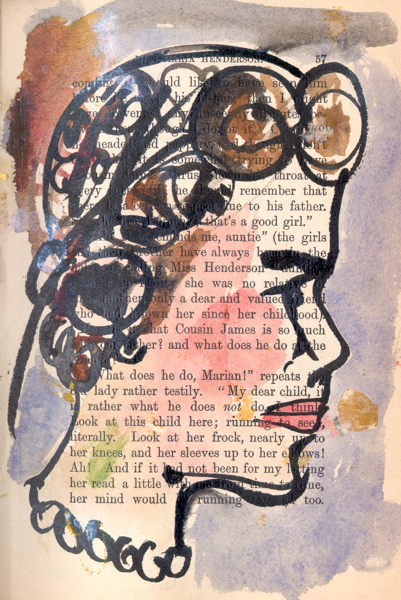 Marian & Dorothy was an exhibition held in the Freud Museum in London, 2000. The date and place of venue added additional layers of narration to the storey as the exhibition space holds both the domestic milieu and the professional practise of the father of psychoanalysis, Sigmund Freud. Like the assumed narration in the book the domestic and the role of nurturing flows along in an expectation that offers a blanket support to everyone's lives especially the main protagonist of the residence, now a museum. In Marian & Dorothy it is this issue of the domestic heroism and the feminine body in all its revelations both physically and emotionally that trigger the imagery. This domain of the domestic so seemly mediocre, commonplace and most times banal, not only is it always there but predominately it remains the domain of the feminine.

It is the trivial, the jetsam and flotsam of life that litters up all our lives as representations of half remembered and milestone events. For it is the trivia that gets remembered while the important and significant experiences of childhood are edited out. Their representation becomes embodied in the banal and presumably insignificant imagery employed as archetypal points of memory for the viewer to activate and interrupt. This trivial imagery becomes the rock to which major emotional knowledge is attached and through which becomes exposed. In his essay that accompanied the Freud exhibition, Nigel Walsh wrote that Freud suggests that the experiences of childhood the significant ones, 'are omitted rather than forgotten' while those that are essential are represented by the inessential or even trivia. Thus the banal becomes a screen; 'the impressions which are of most significance for our whole future usually leave no mnemic images behind them.'